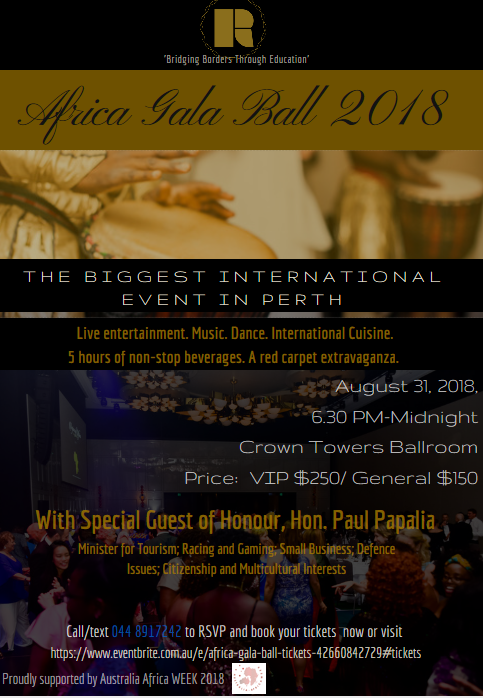 Bound to be the event of the year, the Africa Gala Ball is set to soar August 31st, 2018 as the biggest event in Perth. The ball will be black-tie and will feature everything from trend-setter music, fashion, full-course international cuisine, dance — and non-stop beverages!

The Africa Gala Ball will act as a celebration of African and Australian culture and provide opportunities to strengthen the bonds between the Australian and African continents in mining, international education, tourism, business and community engagement. As part of Australia-Africa Week, we wish to showcase the marvellous things possible between the partnership of these two esteemed continents. This year’s theme is “bridging borders through education”.

Numerous big names will be in attendance, including international, interstate and local guests. This includes ministers, ambassadors, government corps, high commissioners, TV and radio personalities, local and international media. All our guests bring the latest of fashion to the red carpet every year, and we can’t wait to see what this year has in store!

Last year’s event was a sold-out event and a massive success. The Africa Gala Ball was the event of the year and was attended by many prominent members of both African and Australian communities. Such members included the ministers for mining and resources, ambassadors, as well as various Australian and African high commissioners. Before the ball was to officially begin, guests were given the opportunity to talk and mingle with one another as well as have their photos taken by on-site photographers in front of the media wall.

The night began with a fashion show; a beautiful performance on Beyonce’s “I Was Here” was given by singer/entertainer Sylvia Nzeti, who sang alongside a powerpoint display of RoA’s community outreach programs in Africa and then ended with everyone dancing. Between great conversation and dancing, guests were also invited to partake in a silent auction where attendees had the chance to win holidays at over half their original price, beautiful paintings, and even an in-office massage.