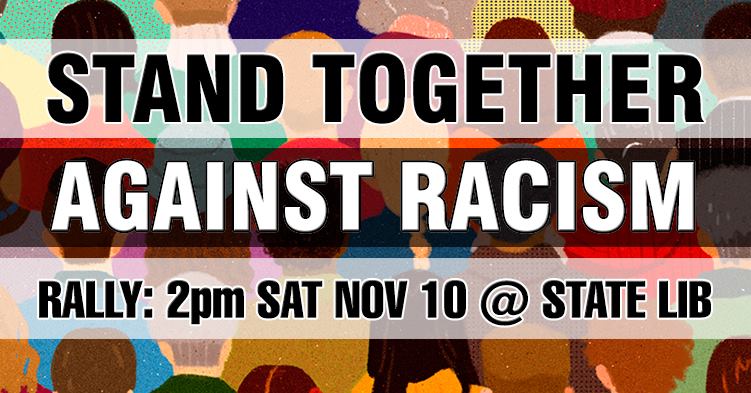 Rally: Stand Together Against Racism

Racism is on the rise. Media and politicians like Peter Dutton and Matthew Guy continue to peddle baseless “law and order” panic. The Liberal’s policies will increase vilification and deepen institutional racism. Their fear campaigns and policies are damaging Indigenous people and African communities; combined with anti-migrant, anti-refugee, and Islamophobic racism in Federal politics, this is producing a more toxic racist environment. It’s an important time to unite and stand together against racism. Join the rally on Saturday, 2pm, Nov 10th.

• Stop Political and Media Vilification
• Freedom of Association not Criminalisation
• Jobs, Education and Housing not Scapegoating

Praise and Shema – two high school students from the Liberian and Sudanese communities speaking against racism.

Speaker from the Australian Education Union opposing the Liberals’ policy of police in schools.

Campaign Against Racism and Fascism

Grandmothers Against Detention of Refugee Children

For more information or to endorse the rally send us a message on Facebook, or call Jasmine 0405 317 787